2017. By midday 12 knots was the sweet spot for all boats tuning up for the

On the water entry level foilers were again getting up as first time riders. As

the production foilers were still able to foil in 6 – 7 knots of breeze. All the foil

Around 30 craft contested the Downwind Dash, a mixture of kite boards,

Flying Phantoms, A Class cats, S9’s, Moths and a whole range of prototypes.

knots with big holes around the lake. The kites immediately broke away, able

to foil much lower angles and remain on their foils. Most of the fleet got

pods around the lake shore.

allowed Robin Maeeer to get the jump to finish first of the foiling cats.

after we were very fast reaching just behind the Moth, but the other Flying

Phantom (Robin Maeder &amp; Jank Roempp) had a little problem with their

spinnaker so we got a bit more advanced. But we couldn’t find the finish line

so we missed it and gave them the win.”

us and the Moths. They are good in the transition in the light winds.

“Lake Garda is quite different from lake sailing in Switzerland, it is flat water

but we have more wind here and it is more stable. We train a lot and we also

improve the boat speed and flight so we like sailing here. We have very close

Garda part of our series.”

An exhibition of foiling dinghies (Whisper, F101, iFly 15 and Waszp, lined the

shore of the Fraglia Vela Malcesine with their designers and representatives

on hand to give guided tours of the craft. Trial sailing continued afloat with the

footed, very fast and really easy to get on the foils even with two people on

board. I sailed for a while with a trainer then took over singlehanded.”

much more intense experience mainly because you are trapezing, you are

hiked further out and riding a lot higher up. The four foil tips make the boat

really stable and responsive. You can easily de-power the main and remain

foiling in a gust.”

“It does exactly what you want it to do. At one point we tried a foiling gybe but

with reduction of waste and even re-cycling.

Enrico Benco who represents Go Sailing for a Change made the comment:

“We need to keep educating kids to make sustainability cool”

Opti regatta in Lake Garda and you capture their interest, and from there they

are aware of sustainable practices and what that looks like”

completely out of re-cycled product.

Luca Torlaj from Polyant, a company that works on recycling carbon

components and fibres, re-iterated the need to combine resources and ideas

on sustainability working closely with the automotive industry.

Pierrerick Cassin from Agiplast, who produce marine and sports equipment

with the re-use of plastics, encouraged the audience to look at regeneration

Luca Rizzotti, the founder of The Foiling Week, spoke about race

management and reducing the carbon footprint at events. A specific initiative

drones. Another idea used at the 2017 Foiling Week is car pooling using

BMW e-cars &amp; use of BMW e-bikes for competitors attending the event.

BMW sponsored 100% electric i3 car. Parts of the frame work and doors

the i3 and was thoroughly impressed.

“We use our cars way to much in New Zealand, this is just such a great car

development for a custom A+ catamaran. Downey used the forum as an

company Foil &amp; Co who manufacture foils for a number of pleasure craft

SUP foiling taps into that as well. Menec also gave details of a new market

now surfers are surfing in new spots on new waves. 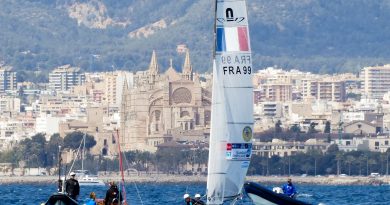 Foiling Bay King of The Bay